Get to know Marlborough step by step, via walking tracks to alpine peaks, golden trails on working farms and native bush walks in the Marlborough Sounds.

Marlborough walks can be as challenging as Mount Tapuae-o-Uenuku, as beautiful as the Queen Charlotte Track and as relaxing as the Taylor River reserve.

Whether you’re hiking for a day or a week, staying in a tent, hut or lodge, you’ll love the pace of Marlborough.

Start planning your walk with New Zealand Mountain Safety Councils Plan my Walk app. An awesome app that provides you with useful information of particular tracks, alerts, weather and what gear you will need. Click here to check it out.

Walk up from Whites Bay to a brilliant viewpoint on the edge of a bluff for views of Port Underwood, Cook Strait and Cape Campbell.

Whites Bay is named after a Black American known as Black Jack White who, in 1828, deserted his whaling ship and took up residence with local Māori. They in turn had long used the bay as a base for fishing expeditions in Cook Strait.

In 1866, Whites Bay became the South Island terminus of an inter-island telegraph cable. The original cable station still exists. Some of the original forest also remains, although much was burned in the early years of European settlement and is still regenerating.

Follow State Highway 1 to Tua Marina (9km north of Blenheim). Turn off at Tua Marina and continue through to Rarangi, before climbing steeply over rugged hills. Whites Bay is 15km from Tua Marina. Alternatively drive 41km from Picton along the unsealed Port Underwood Road. 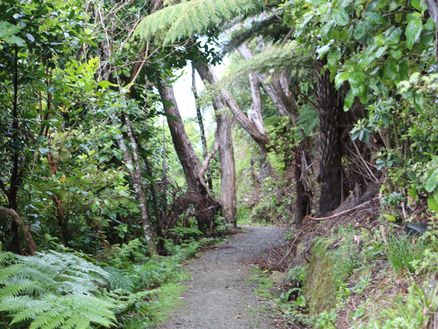