At a small rest area alongside State Highway 1 north of Blenheim, a gnarled old tītoki tree marks the spot where Marlborough's bloodiest battle took place between Māori and Europeans.

Known as the Wairau Affray, Ngāti Toa chiefs, men, women and children faced a group of armed Europeans across the Tuamarina Stream on June 17, 1843.

Nine Māori and 22 Europeans died in the clash, which was the first serious clash of arms between Māori and British settlers after the signing of Te Tiriti of Waitangi/Treaty of Waitangi and which reflected wider Māori feelings of grievance.

The clash was over Wairau land that had been included in a fraudulent deed by European settlers, and which Ngāti Toa rangatira (chiefs) Te Rauparaha and Te Rangihaeata tried to protect for their people.

The issue resulted in a warrant of arrest being executed for Te Rauparaha by almost 50 armed Europeans - mostly labourers without firearms experience.

The tītoki tree stood central to the ensuing clash.

In 1844, the rangatira were officially found to be right: the Wairau had not been sold. If the matter had gone to court as planned, before the settlers took up arms, the affray would likely have been avoided.

In 1869 the Nelson community erected a memorial at nearby Tuamarina Cemetery to remember the European casualties of the affray. The memorial still stands.

Today Ngāti Toa is acknowledged as guardian of the site, in accordance with their Te Tiriti o Waitangi/Treaty of Waitangi settlement. 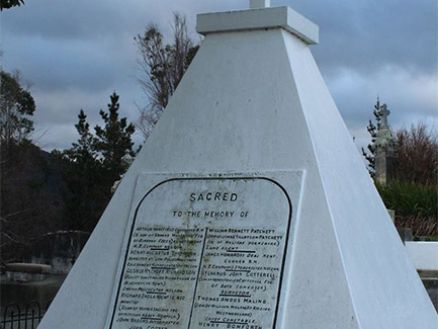