Ngāti Toa chief Te Rauparaha's war parties tore through the area in 1828, killing local Māori and driving others from their land. But many returned to catch birds and eels from the rivers, and Ngāti Kuia’s Te Hora Marae remains today at nearby Canvastown.

A decade after the war parties’ visits, Colonel Edward Wakefield travelled to the head of Te Hoiere/Pelorus Sound and noted the area as promising for farmers and ship builders. Sawmillers moved in and built roads, bridges and tramlines. The highway between Te Waiharakeke/Blenheim and Whakatū/Nelson opened in 1885. In the Rai and Upper Te Hoiere/Pelorus valleys, 58 mills operated, and the cleared land revealed fertile grazing areas.

The town thrived and eight schools opened as farms were established.

One of the valley’s first European settlers was Charles Turner, who from the early 1880s lived with his family in a cottage made from locally pit-sawn tōtara slabs. The Turners’ cottage remains today and is registered with Pouhere Taonga Heritage New Zealand. 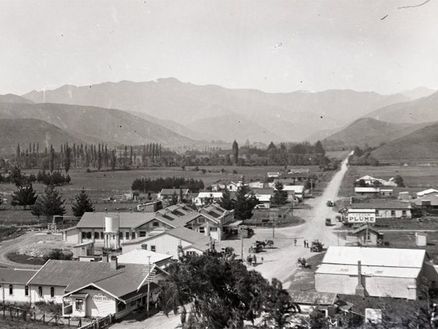