Molesworth Station, in South Marlborough’s high country, is New Zealand’s largest farm. Each summer, many visitors travel through the 180,787 hectare station to enjoy its magnificent surrounds, but also to learn of its fascinating history.

The route across the Molesworth Station is one that was historically travelled by Ngāi Tahu Māori for food gathering, usually in the summer months, or on their way to the West Coast to source greenstone (pounamu), camping along the way. There were no permanent Māori settlements on the route, but in 1850 an old whare (house) was found near the junction of the Acheron and Clarence Rivers.

Māori who taught early European settlers of the high country route, and farmers began taking their stock over the high passes. From the 1850s, the Molesworth became part of the main inland connection between Nelson Marlborough and North Canterbury, called the Canterbury Track. The Molesworth farm itself was created after the Crown amalgamated of three extensive pastoral leases: St Helens (including the Dillon Run), Tarndale and Molesworth. These farms fell into Crown hands in 1938 and 1949 after their runholders walked off the land, exhausted by a severe rabbit problem, overgrazing on eroding land and severe snowfalls. Through the 1950s and 60s the Government recovered the land, which today continues to be farmed under administration of the Department of Conservation on behalf of the Crown.

A number of cob houses were built along the route to house stock drovers. The Acheron Accommodation House, also known as the Clarence Accommodation House, is the only one left today, and is open to the public as a heritage site, with information panels. It was built in 1863 by Ned James, a ships carpenter and station hand known for also building cob buildings. He took nearly a year to build the eight-roomed house. The house grew into a social hub. It included a store and unofficial post office and became a venue for a number of local clubs and meetings. Once its proprietor, Ernie Tozier, died in 1932, the house became used less often and was abandoned in 1954. It has now been restored and, along with the Molesworth Cob Cottage (also open to the public), is registered with the Pouhere Taonga Heritage New Zealand.

The Acheron Road is open from Labour Weekend to around Easter, though it can be closed at any point by the Department of Conservation if the fire risk is too high in the hot summer months. The unsealed road is not suitable for large vehicles, but can be driven by 2-wheel-drive vehicles. The Molesworth is accessed from the Awatere Valley, via Rainbow Station (4WD only, over private land for a fee) and from Hanmer Springs. Camping is available at several locations including alongside the Molesworth Cob Cottage and Acheron Historic Accommodation House. 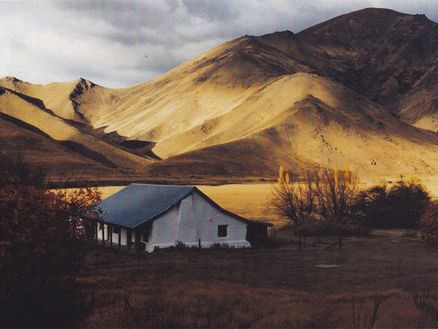