A luxury Russian cruise liner that sank in the outer Marlborough Sounds is one of the world’s largest accessible dive wrecks.

The Mikhail Lermontov was carrying 735 passengers and crew on its voyage from Waitohi/Picton to Piopiotahi/Milford Sound in 1986, travelling in heavy rain and a 25-knot southerly.

As the ship exited Tōtaranui/Queen Charlotte Sound’s northern entrance, it took an unusual and treacherous shortcut through shallow water between the head of Te Taonui-o-Kupe/Cape Jackson and a lighthouse. Passengers reported the 20,000 tonne ship was just 30m from land and, just after 5.30pm, the port side hull was ripped open on the rocky reef. An announcement was made that dinner would be late and the Lermontov, taking on water, drifted into Anamāhanga/Port Gore.

A nearby tanker ship and a Raukawa/Cook Strait ferry rescued hundreds of people, assisted by more than 20 small vessels. There was only one fatality – an engineer from the ship who was never found. The Mikhail Lermontov lies on her starboard side in about 37m of water - the port bridge only about 18m below the surface - by Gannet Point in Anamāhanga/Port Gore.

Many recreational divers visit each year to see and enter the ship, which still contains much of what it went down with, right down to cans of drink in the fridge. But despite its easy access and good visibility, diving here requires high levels of experience – the Mikhail Lermontov has claimed many more lives as a wreck than it did when it sank. 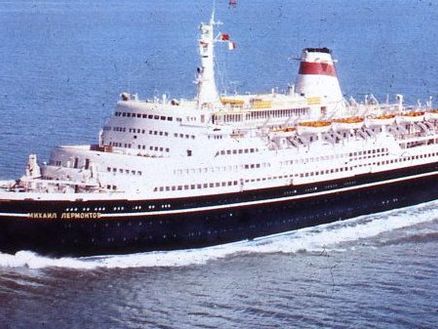