Within a month, up to 4,000 miners had descended on the area, with each allotted a 6m x 9m stretch of the Wakamarina River to dig with shovels and pans. Local Māori used waka to ferry the prospectors up the river.

As the tent city grew, it was called Canvastown, a name which remains today. However, the city disappeared as fast as it came, with the rush ending after just a year. About 150 miners worked the goldfield under a Government subsidy scheme in the 1930s. A number of active gold claims remain on the Wakamarina today.

Marlborough’s second gold rush took place in 1888 at Cullen’s Gulley, near Linkwater, and quickly spread to nearby Waikakaho. Hundreds of miners poured in and a township, Cullensville, sprang up from nothing. It was an extensive settlement with around 1,000 residents. Stores, bakeries, butchery, milk, meat and vegetable deliveries, blacksmiths, a school, a billiards saloon, a bank and hotels were built, along with a wharf at The Grove.

But like the Wakamarina, the rush was over quickly and two years later Cullensville was abandoned. A few miners continued working the valley until the 1930s, but today all that remains of Cullensville are signs marking where it once was.

The Wakamarina and Waikakaho-Cullensville tracks are popular for walkers and experienced mountain bikers. 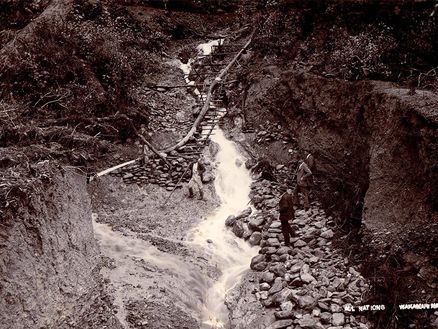