Marlborough’s largest centre, Blenheim, was established as the town we know today in the 1850s.

The lower Wairau was known as Te Waiharakeke by Māori, which means the waters of flax, in reference to the waterlogged land and plentiful flax. For the same reason, it was dubbed The Beaver and Beavertown by many of its European settlers.

When a massive earthquake in 1855 deepened the Ōpaoa River, allowing sea-going vessels to reach newly established Blenheim, the town’s population increased and it became Marlborough’s capital in 1865, then made a borough in March 1869.

Ōpaoa, according to local iwi, refers to ‘smoke’ or ‘smoking river’, as the fog or mist rises off the river. The waterway was once an important food source and part of daily life for Māori, who landed downstream at Te Pokohiwi/Wairau Bar as the first settlers to arrive in Aotearoa some 800 years ago.

According to local iwi Ngāti Toa Rangatira, Ngāti Rārua and Rangitāne o Wairau, the Ōpaoa River has been a landmark on a major travel and trading route for centuries.

One of Blenheim’s most notable European settlers includes nationally renowned surgeon Dr George Cleghorn, who performed New Zealand’s first successful appendectomy. He was appointed medical officer to the new Wairau Hospital in July 1878, where he stayed for more than 20 years. Dr Cleghorn was also a philanthropist who offered free medical services to the poor. He helped establish Blenheim’s gymnasium, swimming pool, the Marlborough Cricket Association and football club. Dr Cleghorn’s memory was honoured by the construction of a band rotunda that remains today in Market Place.

Another piece of history that remains today is Thomas’s department store. This was first opened on Market St South in 1912 by John Emlyn Thomas and his wife Kathleen.

John and Kathleen’s son, Terence, entered the family business in the 1930s and persuaded his brother-in-law Austin Andrews to also join.

Subsequent generations of the Thomas and Andrews families have kept the business running despite many and varied challenges including The Depression, World War 2, strict import controls followed by deregulation, competition within the local market. 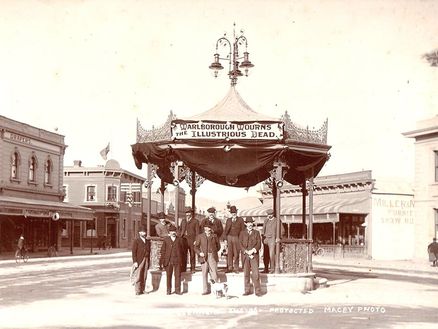 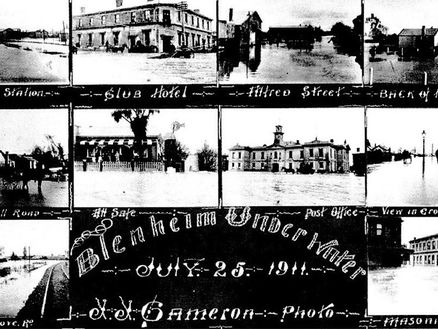