Marlborough’s rich aviation history includes the landing of a record-breaking UK to New Zealand flight by a Kiwi pilot who learned to fly with the Marlborough Aero Club.

On 20 March 1938, Arthur Clouston landed his DH.88 Comet at Omaka Aerodrome, the same place he had learned to fly.

Clouston and co-pilot Victor Ricketts had left England on March 15, arriving in Sydney three days and nine hours later. In doing so they broke previous records, which remained until 1946. The next day they headed for Marlborough, to enable Clouston to see his family for the first time in 18 years. Their flight from Sydney to Te Waiharakeke/Blenheim took seven hours 27 minutes; this record remained until 1945. After a night with his family he headed back to London the following day.

Born in Motueka in 1908, Clouston moved to the UK after learning to fly at Omaka, and joined the pre-WW2 Royal Air Force. He went on to become a test pilot; one of his experiments was to study the effect of ice on aircraft performance by flying into clouds and waiting for two inches of ice to form on the wings and propeller; plummeting towards the ground until the ice melted and he gained control again.

After his record-breaking flight to Australia and New Zealand, Clouston was approached by a Jewish businessman representing a group of wealthy industrialists and offered £1m to assassinate Hitler by bombing Hitler’s car from his Comet during a parade in Berlin. The pilot declined and rejoined the RAF at the outbreak of World War Two, rising through the ranks to Group Captain over the course of the war, finishing his career as Air Commodore and Commandant of the Aeroplane and Armament Experimental Establishment (A&AEE) at Boscombe Down in England. 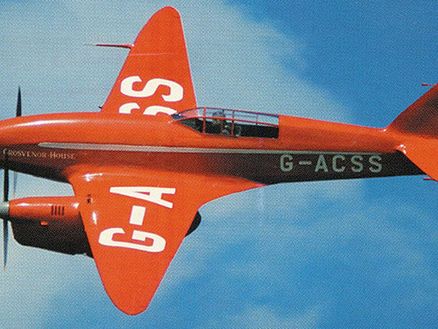