Antimony has been used for centuries for makeup, glassware and glazes. Today its uses include ceramics, glass, plastics, lead-acid batteries and solder.

The discovery led to the establishment of an antimony mine almost 2km from the coastline at Punaruawhiti/Endeavour Inlet. A nearby gold mine, the Queen Charlotte Sound Goldfield, already existed, having been proclaimed in 1872.

The Marlborough Antimony Company began mining in 1874. A smelter started the following year and ore and smelted mineral were exported to Europe.

At its peak, the mine employed and housed more than 100 people, making it one of Marlborough’s largest industries. The community included a post office, school, jetty and even a band.

The antimony mine opened and closed many times in the following years.

It was taken over by the Endeavour Inlet Antimony Company in 1883 and new processing works built 500m from shore. Three more companies and several groups tried to keep it going but by 1908 all had failed. More attempts were made in 1927, 1933 and a new prospector’s licence was granted in 1951.

All that remains of the mine today include remnants of the processing works, waste rock pile, and mine tunnels. These can be reached by a short tramping track off the Queen Charlotte Track.

The antimony mines should not be entered - they are dangerous due to mud, poisonous gasses and rockfall. Hidden mine shafts also make the area around the Number One cut unsafe to explore. 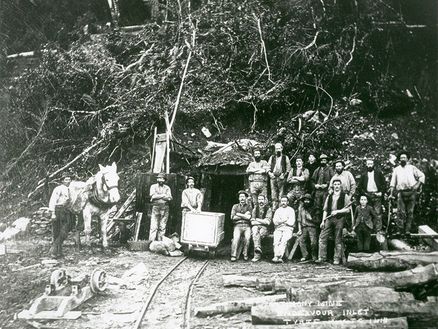